Every car-owner can car-pool by LDA!

At Let’s Drive Along, we believe that we should leverage the usage of collective resources that we have with us as social beings. Collective resources have been the unspoken system of co-existence for social beings for eons now. But for the last few decades with advancement in every field, we have drifted away as we want things only for ourselves, be it for convenience or for pride and the same applies to our chosen means of travel. One of the prime reasons Let’s Drive Along exists is the exponential growth of traffic that gobbles up a great deal of daytime for individuals which could have been spent in doing things that they like to do. Now the reasons for traffic woes are quite simple, a mismatch between the ever-growing volumes of vehicles to the infrastructure that ceases to keep up the pace of this growth.

It’s evident that every day numerous car owners drive in the same direction and may be to the same destination all by themselves. In the business hubs, we find that hundreds of cars are from the same area. So why not travel in a single car while traveling to the same destination and reduce the number of cars on the road. Its needles to say, if three people with similar destination share a car, it would chuck out two - thirds of the cars from the roads, imagine what this equation could do on a larger scale. Although we are aware of this, are we practicing this?? May be because things have not been that easy for commuters to car-pool and also some of the questions related to choosing a co-commuter were unanswered.

At LDA, we have made it convenient, user-friendly and have also devised a mechanism to check profiles of users and create a condensed group that a user can choose to travel with. For example: I can lookup only those who are relevant for me – commuters from JP Nagar to Whitefield. Also another factor that stops people from pooling has been addressed. In native carpooling, users foresee a dependency on the person whom they have traveled with in the morning to tag along in the evening. For instance, commuters’ start from home between 7 to 9 am and if they have a threshold to reschedule the starting time to about 15 minutes, users can find commuters to car-pool with who match their time gate. Now in the evening, the same folks from that morning’s drive may not be able to sync up due to different or extended work schedules, can choose different co-commuters for the ride back home. LDA addresses the need for flexibility to make car-pooling effective and successful.

The social responsibility falls on each one of us to do our bit and make use of services like LDA to reduce traffic issues in Namma Bengaluru. Also, for our own sakes let’s remember the days that we were stranded for hours in rain and waiting for the next car to move by an inch, waiting to take our legs off the clutch and brake to accelerate - Try pooling, Try LDA!! 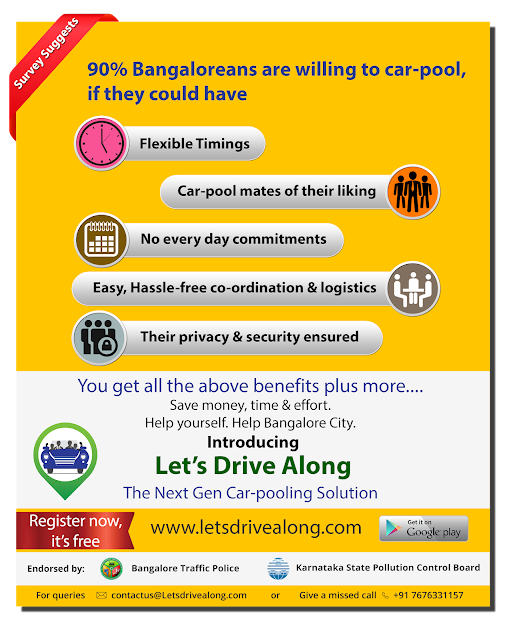 Email ThisBlogThis!Share to TwitterShare to FacebookShare to Pinterest
Labels: Every car-owner can car-pool by LDA